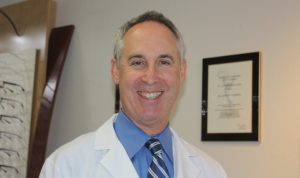 Dr. Gording is a therapeutic optometrist and is licensed to examine the health of the eye, prescribe glasses and contact lenses, and treat eye diseases.

Board Certification: Diplomate of the American Board of Optometry

After 9 years as a contact lens specialist for a large corneal specialty practice, Dr. Gording went into private practice. In addition to seeing private patients, he has been designing and prescribing special effect contact lenses to the motion picture industry for 20 years. Today, he still works closely with a corneal specialist. He is a staff member of Cedars-Sinai Medical Center.

Co-management of Surgery Patients: Dr Gording, in conjunction with A Center for Vision Care, assisted other optometrists with all aspects of co-management of cataract and RK patients.

PRIO Consultant: Dr Gording was among the first consultant to the eye doctors in the use of a special test to help other doctors prescribe for computer vision syndrome from Santa Barbara to San Diego.

Optos Retinal Panoramic Imaging: After being one of the first eye doctors in Los Angeles to acquire an Optos scanner, Dr. Gording was asked to lecture to other eye doctors in the use of the new retinal imaging device.

Dr. Gording currently serves as the director of optometric services at Cedars-Sinai Medical Center. He was previously the clinic chief for the optometry department.

Font Resize
Contrast
Accessibility by WAH
Call Us Text Us